Peyton Manning is now a Bronco

Peyton Manning is now a Bronco

"It was a pretty skeptical decision from my point of view and a lot of football experts seem to agree as well." 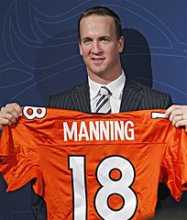 The greatest free agent probably in the history of the NFL Peyton Manning is now a Denver Bronco. Many analysts feel that he would have a much better chance to win the Super Bowl right away with the San Francisco 49ers. It is pretty surprising that Manning chose the Broncos, but was it the best fit?

I guess part of the reason why Peyton might have signed with the Broncos is to stay in the AFC and not have to play his brother Eli in the NFC. Actually, I am just kidding about that. It was a pretty skeptical decision from my point of view and a lot of football experts seem to agree as well. The Cardinals, Miami, the Titans, Washington Redskins, Jets and then the readiest team the Niners were all interested in a potential deal with Manning.

Deion Sanders called out Manning’s decision as a bad move. But it seems like Manning was just impressed by John Elway, executive vice president of basketball operations in Denver, and he felt that they would make a great pair along with Coach John Fox. There seems to be a comfort level with Manning and John Elway and John Fox.

Other than that, the Broncos are just a bad football team and it seemed to be all Tim Tebow last season since Tebow took it over. But Manning wants to finish his career with a Super Bowl win in all likelihood and he probably feels it will be Elway and the Broncos who give him the best chance to do this.

Anyway, the Broncos players and the fans are thrilled that Manning will suit up in a Denver uniform next season. Wide Receiver Eric Decker was very excited and so was Running Back Willis McGahee. It looks like there might be some more free agents who might decide to come and play in Denver with Manning’s teammates in Indianapolis, Dallas Clark and Jeff Saturday, possibly doing so.


Things to Do While You Wait for The Hunger Games


Are Moms As Excited About This Seasons ‘Dancing With The Stars?’