Social Norms: They have them, and we don't

Social Norms: They have them, and we don't 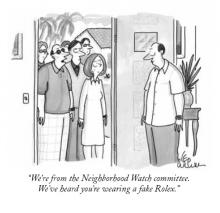 What can we say about social norms in our poor amalgamation, America? What can we cling to in this place that was built from nothing but fractured ideologies? Do we ever know how to behave properly or do we have a sense of shaky awkwardness imbued in us from our first playground mistakes?

All you had to do to distinguish yourself was wear a piece of purple silk in Ye Good Olden Days of Shakespeare’s England. Gentlemen were gentlemen and ladies were ladies then. If you had money, you had a golden spoon popped into your mouth and a guidebook on how to behave properly placed into your hands. With a five course feast of hare, pork, cream, and wafers, you married off your fourteen-year-old daughter to her twenty-one year old cousin. If you were poor, you made sure your mother didn’t throw you out with the bathwater and you learned your place through a rough and rabble childhood. You stood in the floor of the theater so that the smarter higher classes could practice patrician paternalism and figuratively pat your stupid little head from their private boxes, high above you. Social decorum came straight from Queen Elizabeth. Social customs were drawn in stone.

Modern Europe also has solid social customs because it has the histories, or nostalgic renderings of history. They have Before-Dinosaurs customs, dusty books of fantastical fables and feasts, and Moses-wore-white-only-before-Labor-Day standards of behavior.

In Austria, the age old customs and attitudes are still heaped with reverence, even as new innovations seep in. The Viennese were appalled and protested the arrival of a Starbucks into their Mecca of Kaffeehaus Kultur. White-haired ladies and young people in tall boots know how to behave in the intellectual atmosphere, how to play up opportunities to see and be seen, and how to drink little coffees off silver platters. They preserve the dreaded Austrian stare (all Austrians acquire it at birth)-- an unsmiling, cold stare that makes the unlucky recipient drop dead (or want to). The stare exemplifies their haughty, reserved attitudes and is used to keep the Viennese who know the cultural standards (quiet, refinement, appreciation of tradition) in and the foreigners who don’t, out. Their social platitudes may not be as cut and dried as they once were, but they have hard and fast rules which once existed or they believe once existed on which to cling.

We tried to build unified cultural and social norms in the 1950s. An America rocked by World War II clung to traditional ideologies, creating for itself a conservative American ideal. Religion gave everyone a grand narrative, a stable rock in the storm to counter the uncertain future of war-- “under God” was added to the pledge of allegiance and people fought Communism through Christ. Girls played with epitomes of femininity, the Barbie doll, while boys played with her perfect counterpart, the man’s man Davy Crockett. Teenagers “pinned” their sweethearts and perhaps grabbed a quick smooch at drive-ins. Families piled into their Frank Lloyd Frank family homes. Men could talk about the latest TV around the water-cooler at work; everybody could yuck-yuck about I Love Lucy because everybody watched it.

Men were men and women were women then, or, perhaps we like to think so. In our modern society grasping for behavioral straws, the ease of men knowing how to behave like men and women knowing how to behave like women in any situation seems quaint to us today. Surely it isn’t anywhere near a whole truth. This nostalgic retelling of history attempts to give American social behaviors a historical basis. Some even offer these norms as behavioral standards to follow in the modern day.

Still, America is a place of ever more fractured factions built with the pieces of already fractured factions. How can anyone learn how to behave with a group of philosophy majors, stay-at-home mothers, when you were fifteen, in an independent movie theater, at a museum? Each arena one enters has its own ever changing set of rules and potential pitfalls. I know I never got an Emily Post etiquette book for anyone of them. America’s fragmented culture has its own historically ambiguous, often-unspoken rules that we each try and master again and again, hoping for a degree of improvement with each failure.

Do you think Americans will ever learn how we are supposed to behave? Or are we better off without a system?